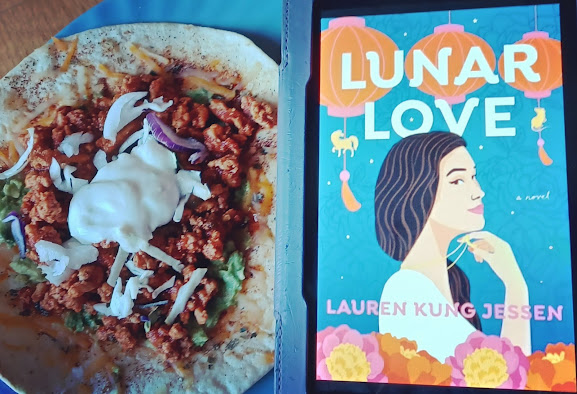 Some early afternoon tacos and a debut rom-com to get me through this hump day.
🌮📖
Olivia is taking over her grandmother's matchmaking business when L.A.'s most eligible bachelor develops an app that takes her Pò Po's traditional Chinese zodiac approach and makes it about "animal attraction".
Bennett believes traditions are meant to be broken, so these two make a deal, find a match for each other and whoever falls in love loses.
I can feel those rivals-to-lovers sparking emotions heating up!
Lunar Love by Lauren Kung Jessen preorder (Jan 10th) link
Cool Ranch Chicken Tostadadillas with Honey Lime Crema recipe
Posted by Whiskeyinthejar at 11:09 AM No comments:
Email ThisBlogThis!Share to TwitterShare to FacebookShare to Pinterest
Labels: Lauren Kung Jessen, Recipes

Review: When Life Gives You Vampires

When Life Gives You Vampires by Gloria Duke
My rating: 2 of 5 stars

I received this book for free, this does not affect my opinion of the book or the content of my review.
I'm sorry, but how is it even possible that I'm absolutely jonesing for a big, tall glass of A positive?
When Lily wakes up after having slept through the day, craving blood, no reflection in the mirror, and no memory of what happened after she went out with her bestfriend Cat, they both can only think, vampire. When Cat takes her to a blood bank that she volunteers at to feed, Lily gets her memory back from the energy the blood gives her. Suddenly Lily's dealing with being one of the undead, a 400 year old hottie that acts like he likes her, and a Grand Master of the North American Vampire Council wanting to exact revenge on her.
He moves closer, getting in my face. “Why do you insist on being the prickly heroine who pushes everyone away?
Told all from Lily's point-of-view and in a stream of conscious that felt chaotic and uneven, Lily worries more about her weight than being turned into a vampire, this didn't quite capture me into the story. We get the flashback of Lily meeting Tristan in a bar and then when he walks her home, he thinks he's using his Influence on her and starts to drink from her neck. Lily, aware of what is happening, decides to bite him back and accidentally performs the ceremony needed to change her into a vampire. She runs from Tristan, goes to Cat the next night and then Tristan catches back up with her to give her some information. It's against the vampire council rules to create a “newborn” without their say so and the Grand Master, Gideon, just so happens to be Tristan's enemy, so it's on with Gideon hunting them to kill them both.
Tristan Newberry bit me two nights ago. But when, exactly, did he start getting under my skin?
For being the male main character and the whole catalyst for what happens and changes Lily's life, Tristan actually felt like a nonentity for a lot of the story. The story being from Lily's pov didn't help getting to know him, we don't get a lot about him or his past, and the way his character didn't really do much had him feeling barely sketched out. After Lily drinks from him, which causes insatiable desire and has them having a bedroom scene around the 65% mark, Lily also learns from Tristan's blood that he had a great love that died. Since Lily has strong insecurities stemming from her weight, she just can't believe Tristan loves her and has her constantly pushing or running from him.
Maybe I like him...a little.
Gideon hunting Lily and Tristan consisted of two threatening notes to Lily and then kidnapping her mother, Gideon was a pretty off to the side villain. We got a little world-building with Tristan explaining the vampire council and then how when a newborn is created a vampire slayer is automatically made, usually the newborn's nemesis in someway. Lily's nemesis was a work colleague and he makes a small appearance to bring in some danger and a little secondary romance with Cat.
Maybe my power was there all along. And I just needed to embrace it.
The last 15% has the big showdown between Gideon, Lily and Tristan. It was an ok battle scene but since Gideon was off screen so much, I'm not sure I really felt the stakes. Lily's mom has a 180 degree character change, she'd been big in fat shaming Lily all her life and even reveals the big secret about Lily's father. I really never felt the emotional development between Lily and Tristan, he's hot and Lily thinks he does caring things here and there between being too protective and Tristan says here and there that he likes Lily. Since I didn't feel there was substance between them, I didn't believe in the I love yous that were thrown out in the end and this couple ended up feeling pretty meh. Lily does bring up her insecurities repeatedly throughout the book and the nonchalant way she took becoming a vampire, her personal weight issues more on her mind at times than becoming undead, just didn't personally jive with me. The tone is supposed to feel fast paced and frivolous but it felt off and chaotic in a way to me that just didn't have the story landing with me.
For the first time, I see that I am so much more.
View all my reviews
Posted by Whiskeyinthejar at 7:10 PM No comments:
Email ThisBlogThis!Share to TwitterShare to FacebookShare to Pinterest
Labels: chik-lit, contemporary, Gloria Duke, mystery-suspense, paranormal, reviews, series 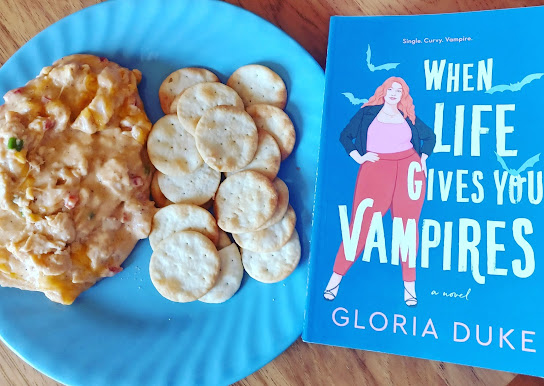 Yep, I'm finishing up my Halloween reads at the end of November
🙃
It feels right for the Monday after American Thanksgiving break. Snacking on some dip, cyber Monday-ing, and reading this afternoon trying to get back into the swing of things.
Have a great week, all!
When Life Gives You Vampires by Gloria Duke purchase link
Honey Sriracha Chicken Dip recipe
Posted by Whiskeyinthejar at 11:17 AM No comments:
Email ThisBlogThis!Share to TwitterShare to FacebookShare to Pinterest
Labels: Gloria Duke, Recipes

Clytemnestra by Costanza Casati
My rating: 4 of 5 stars 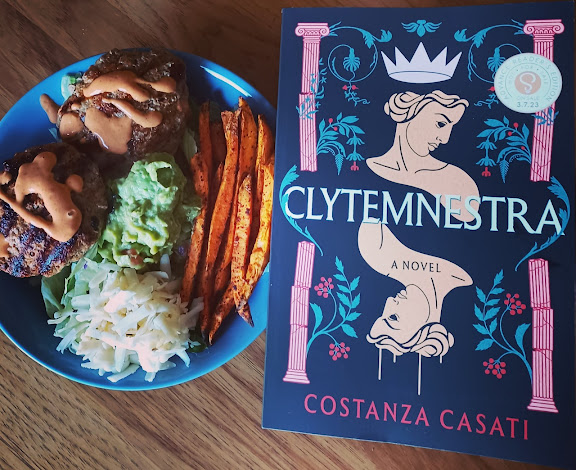 Never Rescue a Rogue by Virginia Heath
My rating: 3 of 5 stars 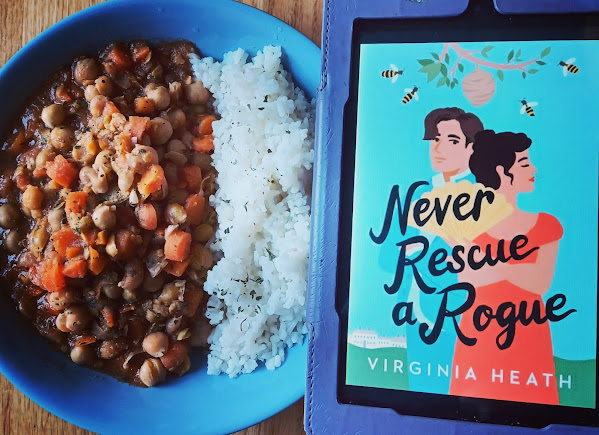 A chilly Thursday afternoon calls for stew and romance.
🍲💋
Diana and Giles have that bickering energy that has everyone side-eyeing because of those sparks. They claim its solid disdain. When Giles gets blackmailed, it's Diana who can help him.
Sparks, intrigue, and truths that are going to have to be faced.
Happy Thursday, everyone!
Never Rescue a Rogue by Virginia Heath purchase link
Chickpea Stew recipe
Posted by Whiskeyinthejar at 11:06 AM No comments:
Email ThisBlogThis!Share to TwitterShare to FacebookShare to Pinterest
Labels: Recipes, Virginia Heath

The Rainbow Season by Lisa Gregory
My rating: 4 of 5 stars

Uphill: A Memoir by Jemele Hill
My rating: 4 of 5 stars

I received this book for free, this does not affect my opinion of the book or the content of my review.
Writing allowed me to breath.
Jemele Hill is a writer and tv personality that people in the sports world probably already knew about because of her excellent work on the network ESPN. In 2017 when she tweeted out about Donald Trump being a white supremacist, and then later Trump tweeted about her, Hill found herself more front and center in the battle already engulfing America about civil rights and conservative medias line of too much “woke”. While Hill leads with what probably garnered her the most name recognition, she quickly goes back to her childhood and tells how it all began for her.
I realized the power of journalism, and the power of truth.
When Hill's mother talks about it possibly being unresolved anger that lead Hill to tweeting, Hill looks back at her childhood and the first half of the book is her unpacking those emotions as she tells her story to readers. There was some of her mother and grandmother's past told and I think it's a great idea to add. It's necessary to understand other people's journey, especially the mothers and grandmothers that play such a big role in our lives, because it often has such an impact on those relationships. Hill talks about those two women's own struggles and how that of course affected her own childhood. Her mother battled drug addiction and PTSD from sexual assaults that at times had their relationship in contention. However, the love between the two always was felt and I loved the tradition Hill's mother kept of taking Hill to at least one Detroit Tiger's game a year. There was love but Hill also talked about how the stress of her childhood lead her afraid to open up and being hardened because of being let down by people you trust and love.
Journalists are always taught to prioritize objectivity, but sometimes journalists hide behind that to avoid exposing hard truths. Adding perspective and context is far more important.
The second half gives us more of her career journey, from Michigan State, to Free Press, Orlando, and ESPN. The drive and pride in doing something meaningful shown through and it's clear why Hill has become as notable as she has. She talked about her mistakes, not thinking through some of the things she wrote and said, the apologies and regret but ultimately growing from the experiences. We also get a story of Hill talking about her abortion that feels extra important and brave to share right now and some of her personal romantic relationships. When her career leads her to ESPN, she talks about not wanting to be a tv personality but seeing how much money it could provide and the stress of working in a business that is predominantly white. Her friendship with Michael Smith and how much their show His & Hers meant to her and the eventual end of her time at ESPN as she felt her growth was now stunted there. For ESPN fans, there is a tiny amount of tea spilled about some behind the scenes but this was Hill's story all the way. UpHill revealed the personal journey that lead to Jemele Hill's professional success.
View all my reviews
Posted by Whiskeyinthejar at 11:45 AM No comments:
Email ThisBlogThis!Share to TwitterShare to FacebookShare to Pinterest
Labels: contemporary, Jemele Hill, reviews 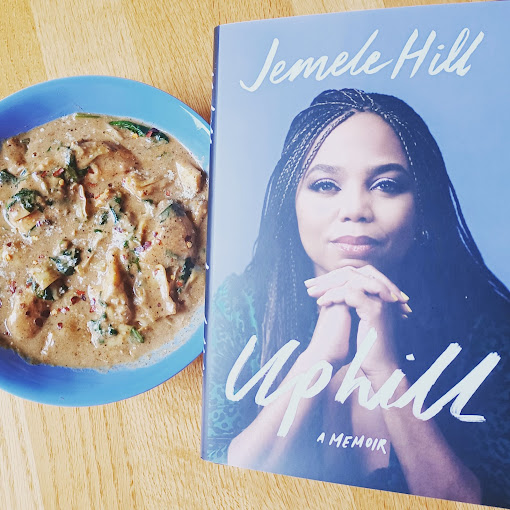 I'm a sports gal and grew up watching a ton of ESPN. Hockey is my favorite sport, so seeing Linda Cohn talk shop always delighted me and then when more women got opportunities at the network, Jemele Hill emerged as a favorite too.
Jemele Hill expressed herself in the world of sports in a way that many probably wanted to but didn't quite have the courage. Listening to her podcast is like sitting around with my friends and discussing the world with sports always creeping in.
Can't wait to see an even more personal side to Hill in her memoir.
Uphill: A memoir by Jemele Hill purchase link
Skillet Chicken with Creamy Spinach Artichoke Sauce recipe
Posted by Whiskeyinthejar at 10:09 AM No comments:
Email ThisBlogThis!Share to TwitterShare to FacebookShare to Pinterest
Labels: Jemele Hill, Recipes
Older Posts Home
Subscribe to: Posts (Atom)

The Broken
by Shelley Coriell
tagged: halloween-bingo and currently-reading

The Devil of Downtown
by Joanna Shupe
tagged: arcs-to-be-reviewed and currently-reading